When people think of German wines, invariably they think of sweet styles and brands as Blue Nun (Still going strong) and Black Tower. There is so much more going on though, from the different styles of Riesling, the varied grape varieties and the history behind it all.

There is evidence that wild vines, Vitis Vinifera Silvestris, was growing on the slopes of the Rhine river before the Romans appeared, but whether this was for wine or food was not established. Other archaeological discoveries have found curved bladed tools around Roman escapements, these were usually used for the upkeep of trellised vines for the production of table grapes and wine making grapes. Around the date, 370 AD the steep vineyard slopes of the Rhine are mentioned in a document written by Ausonius of Bordeaux. As was usual in Europe, around this time, people of influence and royalty often gifted vineyard plots to the Church for recompense of wrongdoing, the Merovingian king Dagobert I gave vineyard plots now located in Baden, to the church of St Peter as early as 650 AD. During the 14th and 15th Century wine’s dominance was threatened by the development of beer as the everyday drink in Germany. Throughout the later centuries German wine was continually changing whether it was border changes, climate changes or market changes there was always a change of one sort or another and the sweeter style wines of a few decades ago have given way to crisp, dry styles that are in favour now. 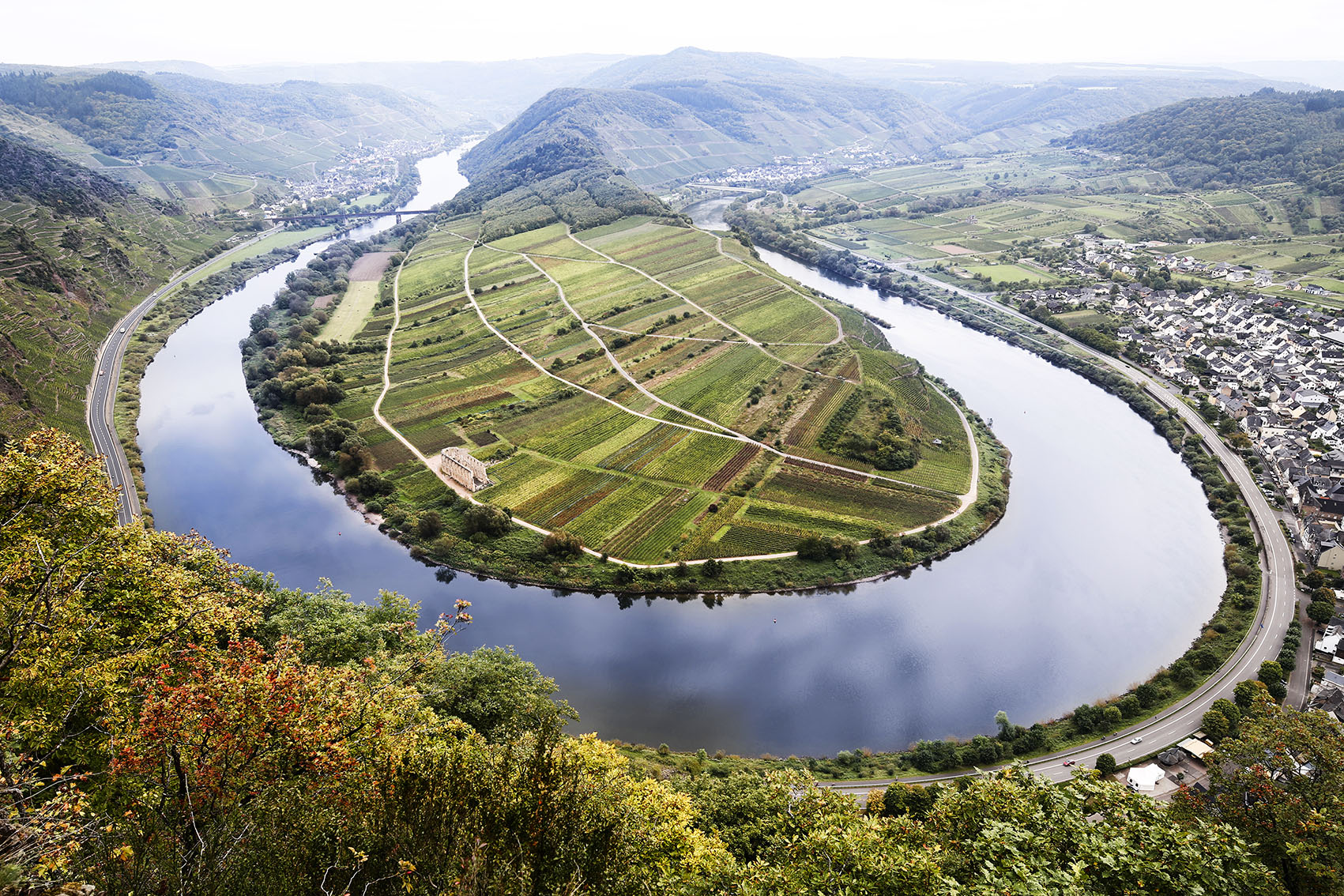 As if all that history was all that German wines had to contend with, you would hope that making these wines would be easy. Germany has some of the steepest vineyard slopes in the world. These are usually found along the banks of the Rhine, Neckar, Nahe, Ahr and Mosel and they involve some extra precautions before starting work. As well as the normal gloves and secateurs needed to prune and harvest grapes, some slopes require climbing harnesses, ropes and carabiners for safety, as a tumble down the slope will only stop when you hit the water. There’s also elaborate setups for the grape containers, with tracks or pulley systems in place. All these little bits add to the high cost of cultivation but justified with the high quality results afforded these places. It is estimated that it takes three times longer to work these steeply sloped vineyards than a similar sized flat vineyard. 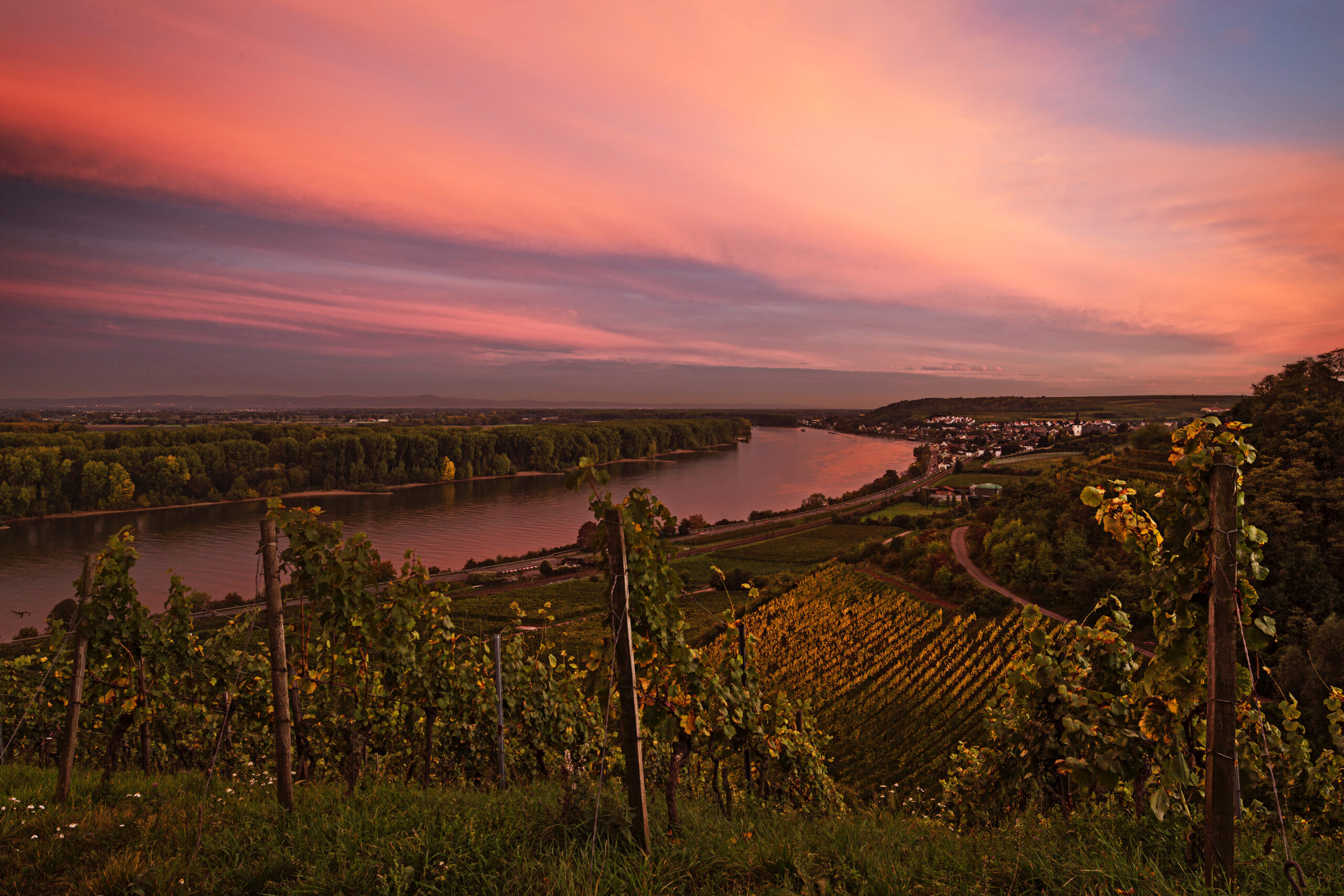 There are many grape varieties growing in those steep vineyards, while Riesling accounts for 23% of the total vineyard space there are lots more to choose from the white grape Muller-Thurgau and the red grape Spatburgunder (also known as my favourite Pinot Noir) are almost equal with 13% each of the vines grown in Germany. Others that are grown here are Sylvaner, Grauburgunder (Pinot Gris), Weissburgunder (Pinot Blanc), Dornfelder, Blaufrankisch and Mullerrebe (Pinot Meunier) to name a few. The more international grapes such as Sauvignon Blanc, Merlot, Chenin Blanc are slowly being planted in Pfalz and Rheinhessen regions.

Whatever style of wine you prefer drinking, Germany has a style to suit, whether it’s the crisp, dry, zesty style of Riesling from Pfalz or a berry filled red Spatburgunder from the Baden region, there is plenty to choose from and they all represent great value for the quality they provide (Germany has some of the strictest wine laws in the world, that are continuously updated). And the Rieslings age particularly well, easily staying fresh and interesting after a couple of decades.

Some wines from Germany, other than Riesling:

Grown in the cool climate of Germany on limestone soils, this style of Sauvignon Blanc is full of aromatic notes and nicely balanced acidity. There’s hints of mango and passion fruit with a lingering citrus finish on the palate. A fresh style that would go well with spiced chicken or prawns.

A relatively new grape to the region, with the rootstock coming from the Loire Valley. Following harvest, the grapes are gently pressed and left in contact with their skins for a few hours to add texture and body. They used a wild yeast and then finish the wine in cement eggs. There’s plenty of soft stone fruits on the nose and palate. Hints of apricot and nectarine leaves a long lingering finish.

Fritz Wassmer ‘XXL’ Spatburgunder 2015 Baden £46.99 A self taught winemaker, Fritz
Wassmer has established himself as one of the top winemakers in Baden, especially for Pinot Noir. This is a different style to the lighter Burgundian style Pinot Noirs, with a touch more darker fruit and a little more warming spiced notes. There’s a lot of cranberries, cherries and strawberries on the nose, with a touch of rosemary in the background. On the palate there are plenty more of those berries with texture and spice in the finish. This wine has some bottle age already but will keep for a few more years to come.