What is Beaujolais Nouveau?

If you had been working hard, in the late 1800’s, collecting the grape harvest in certain French wine regions, you would be able to celebrate the end of the years harvest with a glass of young, just made, wine. One of the most popular versions of this tradition was Beaujolais, a very popular wine in the local bars and restaurants of nearby Lyon. It was fresh, fruity and had low tannins, a perfect lunch time drink. This newly made wine was served straight from the barrel into pitchers, sometimes filling them by dipping the jug straight into the barrel. 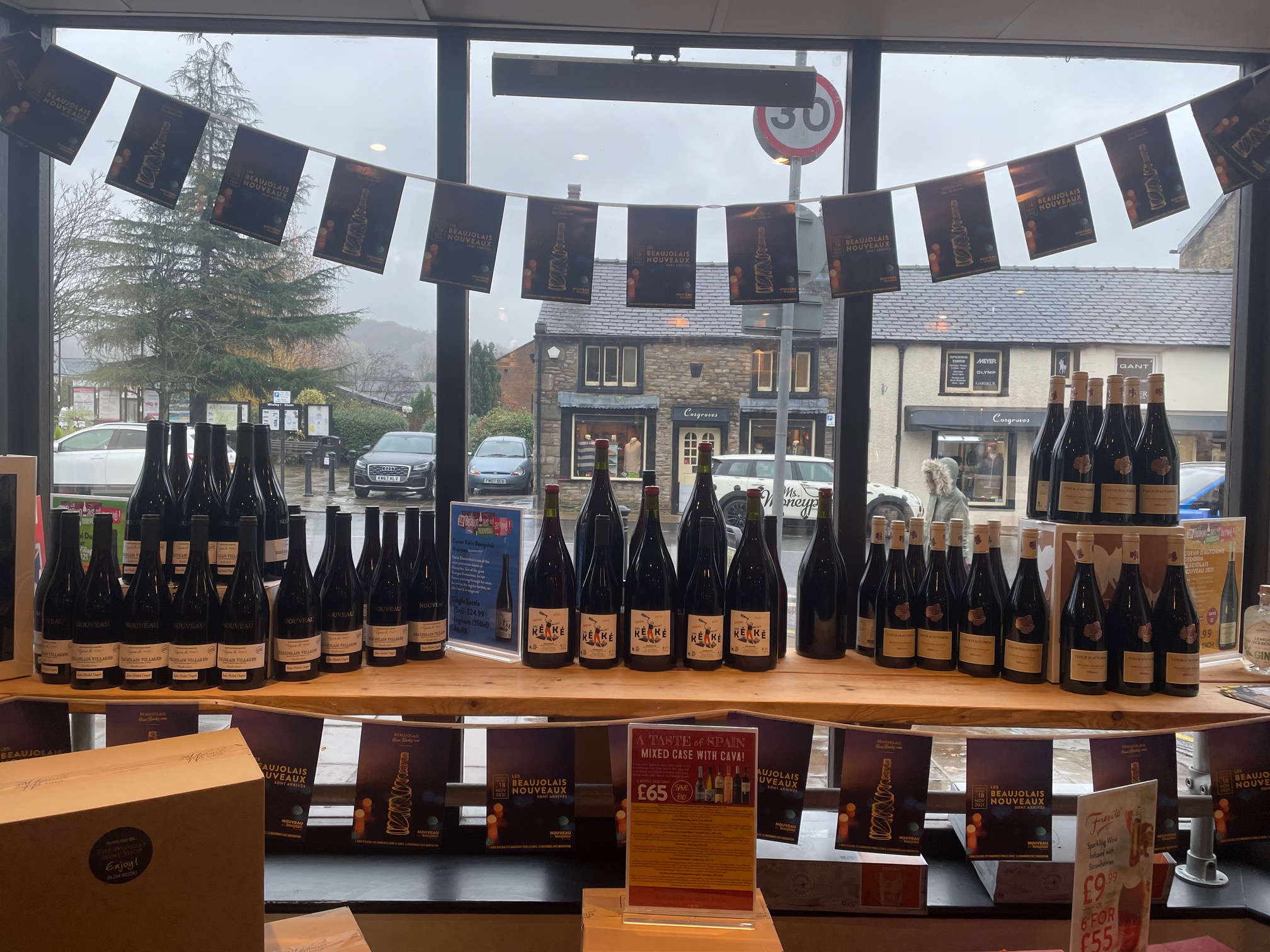 The Beaujolais style of wine is created by a particular method of fermentation called Carbonic Maceration. Hand harvested grapes are placed into large containers, sometimes stainless steel, sometimes concrete. A dose of carbon dioxide is added to the mix, to create an unique oxygen free atmosphere. The weight of the grapes at the top, gently crushes the grapes at the bottom, starting the fermentation process. This creates more carbon dioxide which starts a unique self contained fermentation inside the whole grapes that are left, these then burst and the juice starts to flow. After a few days of fermentation, for Beaujolais Nouveau, the resulting grapes and juice are gently crushed and the juice is returned to the tanks to finish and settle.

Originally the resulting wines were released after the 15th December, but more recently it was set as the third Thursday in November.

It wasn’t until the early 1960’s that the Beaujolais Winemakers realised the potential for some fantastic marketing, suddenly there was a race to get the Beaujolais Nouveau into the restaurants of Paris as fast as possible. By the 70’s the English clubs and restaurants had teams of drivers in fast cars ready at the gates of Beaujolais producers to see who could get the wines to table the fastest, sometimes leaving excess baggage and spare wheels behind, it had become a national event. Eventually, Beaujolais Nouveau was travelling on hot air balloons, military jets, Concorde, 747’s, rickshaws and even elephants (Maybe not the fastest mode of transport).

But Beaujolais isn’t all Nouveau, within the Beaujolais region there are ten ‘Crus’, these are villages that show a marked difference in style to the rest of Beaujolais, these are Chiroubles, St Amour, Fleurie, Regnie, Brouilly, Cote de Brouilly, Julienas, Chenas, Morgon and Moulin-A-Vent. Each village has its own unique soil make up, its own aspect in regards to sun direction which in turn creates certain nuances in its wine. The region itself was part of the Roman empires trade routes to the north, and certainly was influenced by their winemaking influences, there is evidence of a hillside vineyard on Mont Brouilly (Brulliacas) which was a Roman encampment. Once the Roman empire retreated the winemaking was picked up by the Benedictine order of monks who developed the already existing vineyards, mapping the better ones, building walls around the very best.

Within the Beaujolais region the main grapes that are allowed are Gamay for the red wines and Chardonnay for the white wines. There is also a small amount of rose and sparkling produced in the area. Recently, the younger winemakers are looking to a more ‘natural’ style of winemaking and less sulphur is being used.

The Wines
Oedoria Beaujolais Nouveau Couer D’Automne 2021 £12.49
The Cave Oedoria are one of the better Co-Operative wine makers in the area, comprising over 230 grape growers and wine makers. A gorgeous deep purple colour, with aromas of red and black fruits. On the palate there are lots of juicy fresh fruits, and a touch of acidity to balance. A great wine to go with cheese and charcuterie, but best of all with friends.

Jean-Michel Dupre Beaujolais Nouveau Sans Sulfites 2021 £13.99
Jean-Michel is a 5th generation Winemaker on the outskirts of the village of Beaujeu, which gives the region its full name of Beaujolais. He makes his wines, including this Nouveau, with as little intervention as possible, with no chemical use and no additional sulphur. The vineyard is farmed organically, and is on the slopes of Mont Brouilly opposite the village of Regnie. This wine is full of blackcurrants and black cherries, but with a lovely streak of minerality which gives it an extra layer of complexity.

Franck Bessone Domaine du Granit Fleurie ‘Les Garants’ 2018 £18.49
This is not a nouveau, but an excellent example of Beaujolais from the Cru of Fleurie. The Domaine have been growing Gamay here since the early 1900’s, and have plots of vines in Moulin A Vent, Fleurie, Chenas and St Amour. This wine is a step above the Nouveau, with a deeper ruby colour, and a touch of savoury character on the nose, to accompany the dark berry fruits and a touch of truffle. Long flavours of blackcurrants and cassis, and a warm spice note at the end. One of my favourite wines this year.